Get your creative juices flowing with these 15 bachelorette party games from The Everything Bachelorette Party Book by Jennifer Lata and Shelly Hagen. Best of all, there's something for everyone, from the more reserved to the downright wild. Party on! 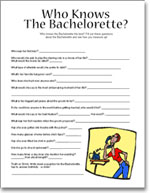 Trivia games are always fun and especially at Put-in-Bay. Although you'll have to do some research to set up the questions, the payoff will be worth it. There are several variations of this game. The main one is simply Bride Trivia. Who knows the bride the best? The obvious answer may seem to be her family or her childhood friends, but that's not always the case. To set up this game, ask the bachelorettes some really obscure questions about the bride, like what type of shoes would she wear everywhere if it were socially acceptable or what kind of work would she be doing if she had the chance to go back and change her college major? The game can easy be turned towards the more fun side with more intimate questions such as when she had her first kiss or where she met her soon-to-be-hubby.

The rules for this game are simple, each contestant admits something they've never done. For example, "I never went kissed a boy in a Put-in-Bay bar." Anyone who has ever done this has to drink. You are perfectly free to say you've never done something that you actually have - as long as you drink anyway. Hilarity and giggles will be the order of the evening as everyone watches who is taking a drink and the bachelorette learn something about eachother. The key to this game is creativity. Think of the most crazy and outlandish things you've never - or ever - done. You may learn more about each other than you ever wanted to know or even dared to guess, which is the whole point of this game.

The Hour of Power 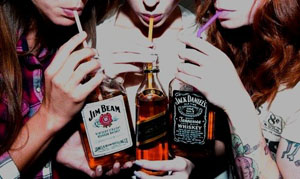 A note of warning: This game is geared toward girls who can hold their liquor and is ideal for the party atmosphere of Put-in-Bay. Bachelorettes drink a shot of beer every minute or two for an hour (adjust the time according to your particular bachelorette group). An alternative is to substitute hard liquor every 15 minutes. This game is sometimes called the Century Club, and can be played alongside any of the other games listed here. A third variation of this game is to see how many Put-in-Bay bars you can buy a drink from in one hour of time.

There are two popular versions of stumping the girls with letters. The first is to pick a category broad enough so that there are actually enough items in the genre to begin with every letter of the alphabet - geography and liquor brands are popular for Put-in-Bay. Have everyone take turns naming an item, going in alphabetic order - Absolut, Bacardi, Crown Royal, and so on. At the end of the alphabet, start over. Whoever stops the alphabet train has to take a drink.

If an adult party is right up your alley, try dividing the girls into groups and having them hunt for fun party (adult) toys. You can be very creative in where you hide things around the resort or house, and watch the girls' consternation as they search and search. Just make sure you keep a list for yourself so that you can retrieve any items that no one could find. If you're really generous, you can let your guests keep what they find. If you have a whole weekend at Put-in-Bay at your disposal, you can also make a list and send your guests out into the real world and let them loose on the island. Of course, you'll want to make sure that most of the items on their lists can be found in island stores or are probably brought to the island by single guys, adding to your amusement and their embarrassment. Think of what a guy would be carrying in his pocket or on his body or what you find inside Mr. Ed's.

If one of the bachelorettes is married, pull out her wedding video. If not, ask a married friend to bring hers. Every time the camera shows the bride's fake, nervous smile, everyone has to drink. Or drink every time the hyperventilating groom wipes his brow, every time a drunken bridesmaid or grandmother stumbles across the dance floor, every time one of the wedding guests calls the bride or the groom by the wrong name while cheerfully wishing them well, etc. A great alternative is to watch a show on TV and everyone picks a character's name, drinking when their character's name is mentioned. Set your own rules and keep the wine flowing. It could be a painful show. 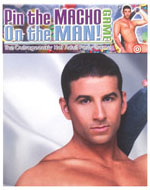 This is a variation on guessing how many jellybeans are in a candy jar, except that your guests will be guessing the exact measurement of the likeness of a manly buddy that you have brought with you. Make sure you have a ruler with small enough increments (millimeters) so that your bachelorettes can get the exact size - it makes the game more interesting. The closest guess wins.

This is a great game with a lot of variations to it. Pick any genre (actors, TV personalities, or people you actually know). Then pick a category like "people ever slept with" or, in the case of actors, "participation in movies that bombed." Here's another example. You name a musician; the next player has to name a song. Others continue to name songs until you've exhausted the musician's catalog of recordings. Or name an oft-recorded song and try to name everyone who has recorded it. Name all the musicians who died of substance-related causes. Pick a letter of the alphabet and name as many musicians as you can whose name starts with that letter. Whoever gets stumped, of course, drinks.

Give the Bride a Hickey

Carry some flaming red lipstick with you. As the night progresses and your bachelorette group starts running into more and more drunken men, you can play Give the Bride a Hickey. Drunken men will usually not think twice about your applying lipstick to their mouths if it means they get to leave a mark on the bride's bod. Maximum embarrassment for him and her.

Bring along some candy necklaces for all the girls in your group. Only men can bite the candies off (one candy per guy). The first bachelorette with an empty string around her neck wins. Alternatively, the bride may sell her candies to men. They'll still have to bite them off, but they'll have to pay her a dollar or buy her a drink - whatever she wants.

In addition to the fake veil you're going to make the bride wear all evening, consider that perhaps she has a streetwalker side to her that she very rarely gets to show in public. Buy her some trashy items so that she may flaunt this side. Maybe she really likes pleather microminis and fishnet stockings. And who cares if she doesn't? If she just won't go along with that, at least buy her a fun little T-shirt. There are countless to choose from, complete with fun little sayings printed on them, like "Bad Girl" or "Evil." If you just can't find the right garment in a store, make her a T-shirt that proclaims her status as a woman of questionable character. Think of an interesting catch phrase to scrawl on it something like "Bride with No Pride." The more homemade this shirt looks, the better. And you should look for something extremely snug.

A Partner for the Night

The ultimate humiliation is handcuffing a blow-up doll to the bride and forcing her to carry "him" around all night. If you're really feeling creative, you could glue a picture of the groom's face in place of the doll's - not necessary, but a nice touch. Give him some undies (maybe a man thong) if you want - in fact, this may be funnier than letting him hang out all night.